Full Speed Ahead! Eliminate All The Enemies!

Cut through the waves, and sink all the enemy ships!

Leaders can use the Blue Devil roadster to get double the amount of rewards.

Every 10 Ship Remodeling Kits is equivalent to 1 Attribute Point.

The allocated Points can be reset at any time.

Health: determines the number of attacks the ship can withstand, each enemy attack will reduce the Shop's health by 10.

Fuel: determines how long the Ship can sail at sea. Fuel will also be consumed when the Ship isn't moving.

Speed: determines the Ship's ability to move at sea.

Blue enemy: needs 3 hits to destroy, their attack will fire 1 bullet and provide 5 points when destroyed.

Purple enemy: needs 5 hits to destroy, their attack will fire 3 bullets and provide 15 points when destroyed.

Red enemy: needs 8 hits to destroy, their attack will fire 5 bullets and provide 30 points when destroyed. 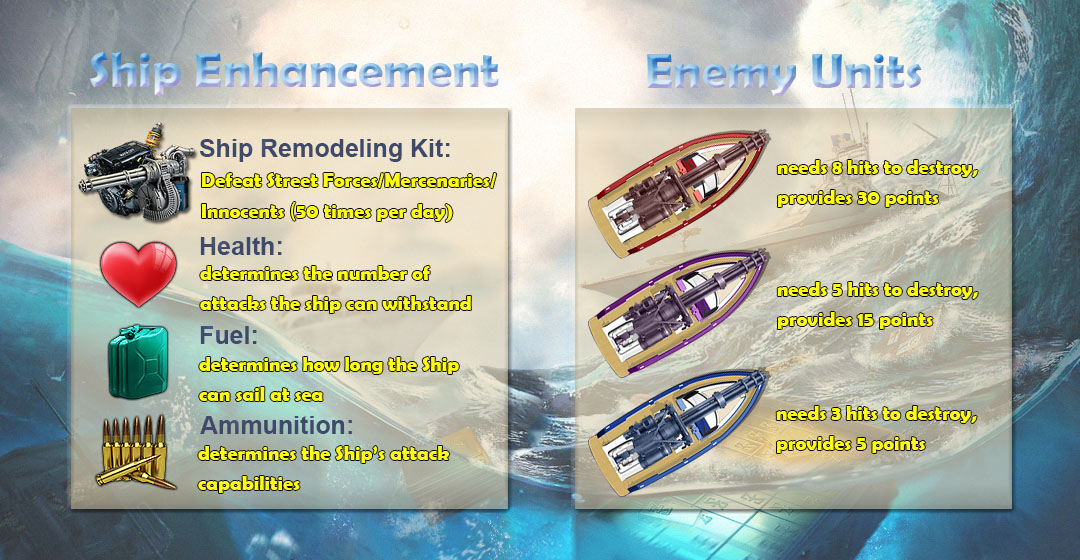 1. As most newbie players are unable to survive till the time ends, it is best not to increase the Fuel attribute at the beginning of the event.

2. Event points can be reset at any time. This is why it is recommended that Leaders increase the Speed and Health attributes to survive longer to have a great chance of getting more points.

1. The Ammunition takes time to reach an enemy. As such, shoot the enemies at close proximity to avoid wasting Ammunition.

2. The only way to survive in the event is to avoid getting hit by the enemy's Ammunition. Stay in parallel with enemy bullets to avoid taking hits from enemy Ammunition. It is recommended not to change your course when you encounter a lot of enemy Ammunition to avoid entering another enemy's line of fire.