You can use Crime Ops Accelerations by clicking on the “Speed Up” option to shorten your crime ops’ marching time, thus making it harder for enemy to respond to your attack. 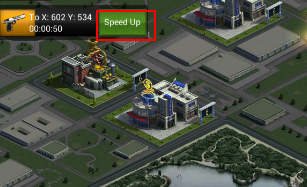 But battles are never so easy. You should first Spy before the attack to obtain information on the enemy’s defense crews and defense weapons as well as the reinforcements that is hidden.
By using the “Anti-Spy” item you will be able to prevent the information from exposure. 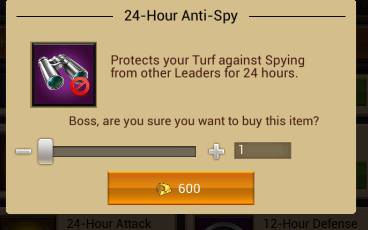 Only when you are sure troops you send out is more powerful than the defending one, then should you attack. And by winning the battle,you will be able to rob the enemy’s resource.
You need to be careful when attacking another leader’s Mansion, when his power is similar to yours.

A crime ops has a limit while the defending team consists of all the crews available in the Mansion.
During an attack all the crews defeated from the attacking team will direct result in death while the crews in defense team will result as wounded until the Hospital Center is full
(All exceeding crew will thus result as dead). But crews from both sides will result as wounded if the battle took place in a resource site on the Map.
As such the Raid option can be considered when attack a powerful enemy.

Temporary buffs include Attack Buff, Defense Buff, Crime Ops Boost and many more. Buff is a powerful tool, so don’t forget to use them in battle!

The Active Skills in battle can be found as follows: “Beck and Call” --- Immediately recall all your crews in 3 seconds, “Ringleader” --- Temporarily increases the max limit of crime ops.
“Rescue” --- Turns all loss crews in the first battle after using the skill to wounded. Rescue is a rare type of battle skill that requires the Leader to be at least level 38 to activate.

How to reinforce others?

How to reinforce others?

Why must we join a clan?

Why must we join a clan?