Let's go over this!

There are all together 20 VIP Levels. After a player has reached VIP10, SVIP1 will be unlocked. This will go all the way up to SVIP10. Below you can find some of the unqiue Buffs a player can get from the different VIP Levels:

VIP5: Preset Formations +2 (tap the butler standing with your troops in base to reset your team)

unlocks the Plantation's "Plant All" feature.

players will be able to exchange Emblems in bulk. 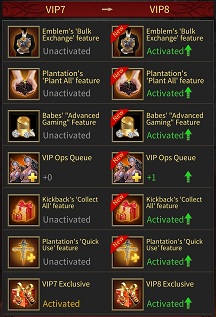 VIP9: Crew Attack and Defense are increased by 10%% and unlocks the Roadster Club's "Buy All" feature.

"Use All" feature for Buff Items unlocked, players will be able to activate multiple buffs at the same time now;

The Babe's “Gift All" feature unlocked 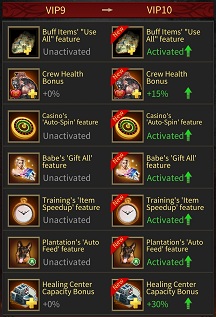 SVIP1: Raid Capacity is increased by 10K, 2 extra Gem Making Queues added, the ability to make the search bar in the City give priority to Resource Tiles with better resource unlocked.

SVIP2: You will be able to skip the Casino's "Animation" feature 200 more times and unlock the Lucky Poker's "Flip All" feature;

The Anonymous Announcements Feature unlocked, you can hide your name in system announcements now;

The "Speedup All" feature and the Healing Center's "Quick Access" feature will also get unlocked. 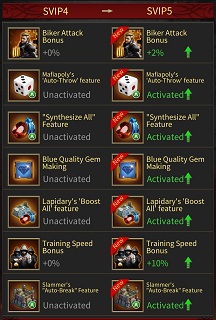 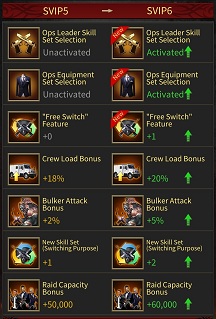 SVIP10: Unlocks the "Buy All" feature for the Plantation Store;

Note: You can go to the VIP Interface every day to sign in and collect free VIP Point Items.

The 1st Step To Be A Warlord--Know Your Crew